Today, we are checking out at the contents of the Reman Warbird Scimitar Expansion Pack, which will be available in November as part of the Star Trek: Attack Wing Wave 9 release.

Players will appreciate the firepower of the ship as well as its ability to remain cloaked after attacking.

With Shinzon in the captain’s chair, players can have several options on hand when it comes to their Elite Talent choices and can choose the one best fitting the combat situation.

The Viceroy will also serve players well with his ability to know where a ship will be moving during the Activation phase. Hiren can be used as a Captain or as the fleet’s Admiral to increase attack potential.

Reman Boarding Party will be useful when you want to severely hamper the effectiveness of an opponent’s ship before setting it up for a killing blow.

Alternately, the Thalaron Weapon can be used to discard crew upgrades as well as the Captain on an opponent’s ship with the possibility of additional damage occurring to the ship.

There is also always the option of using Photon Torpedoes to finish off the opponent.

For additional defensive capabilities, Secondary Shields will keep your ship alive a bit longer and the Improved Cloaking Device will allow for a ship to continue cloaking even if it has no active shields or if it has an Auxiliary Power Token beside it.

When attempting to win The Bassen Rift mission, players will love the options provided by Shinzon when they consider the three different Elite Talents contained within the expansion.

Attack Pattern Shinzon Theta can increase damage to a ship’s shields, thereby increasing the likelihood of a Critical Hit scoring upon the opponent’s hull.

Full Stop introduces the ability to remain in place as opposed to activating your ship’s chosen maneuver for a turn.

Hiren
Captain Skill 2
Admiral Skill +1
1 SP
ACTION/FLEET ACTION: Disable 1 of your [CREW] Upgrades to gain +1 attack die this round.
Only a +1 Skill and not the greatest use of an action for the Fleet Action, but at only 1 SP cost, this admiral is a deal!

90 arc front and back 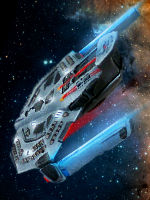